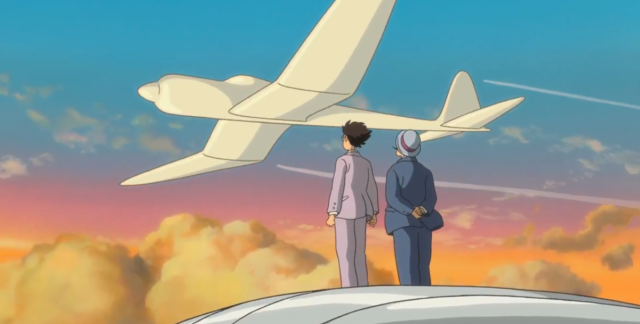 More then any other film that Hayao Miyazaki has made, The Wind Rises seems to be a mirror that casts the most personal reflection of the animated auteur. Part of this comes from Rises being the last movie he made (before his temporary retirement). But it also comes from the parallels that the director has with the main character.

The Wind Rises is a story that spans several decades in its depiction of the creation of the Mitsubishi A5M fighter plane by designer- Jiro Horikoshi. Initially starting out as a boy with dreams of flying planes, Jiro eventually becomes enamoured with designing aircraft. In between this major event, the film charts his early days of surviving the Great Kantō earthquake to his meeting and marriage with the love of his life- Naoko Satomi.

Despite being a film that’s not directly made to speak to kids: The Wind Rises is made with the sensibility of a child with a boundless imagination. There are many sequences that have Horikoshi speaking to his hero- Giovanni Battista Caproni (an Italian aircraft designer). Aside from being sequences that allow Jiro to dream and be inspired by the planes he sees Caproni make, they also represent Miyazaki’s most personal moments.

Jiro’s conflict of wanting to creating planes that are not designed for war, but instead are beautiful creations feel like Miyazaki wanting to make stunning animated features that are awe inducing in their own right. Through Jiro, it feels as though Miyazaki is depicting his frustration of making art in a world that demands products are made for profit and particular markets.

At the same time, Miyazaki also has other scenes that make certain events seem like a child is perceiving them. The sequence depicting the Kanto earthquake makes the event appear like a living and breathing monster who is swallowing the surrounding area. These scenes along with many shots that have scenery that feels like Eastern infused William Turner paintings are some of Miyazaki’s most stunning instances of animation.

But the film’s best moments are those where the more adult oriented material pervade the picture. They’re like shadows that loom over the characters, whether it’s lip service given to a company going bust or Japan’s future after joining Germany in the war.

But there’s always a sense of Jiro fearing his planes being turned into instruments of war, along with his duty to his work and ailing wife. For this reason and many more, The Wind Rises is a soaring film that speaks to the value of imagination and a life well lived.

Notes from a distant observer: “Sartaj is a very eccentric fellow with a penchant for hats. He likes watching films and writes about them in great analytical detail. He has an MA degree in Philosophy and has been known to wear Mickey Mouse ears on his birthday.”
View all posts by Sartaj Govind Singh →
This entry was posted in 2020, Miyazaki May and tagged anime, Art, Blog, Entertainment, film, films, life, Miyazaki, movie, movies, Reviews, Writing. Bookmark the permalink.