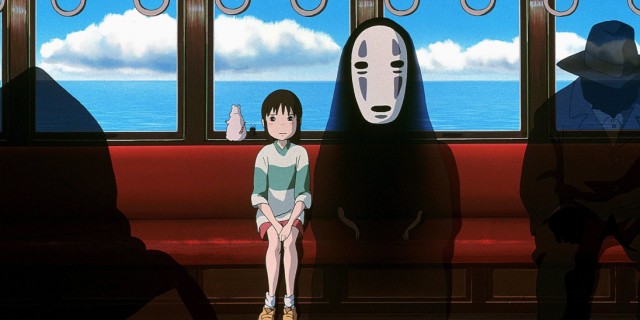 Spirited Away is a special film. It’s an experience that’s delightful, wondrous and truly transportive. Whilst on a stroll with her parents, Chihiro Ogino (Rumi Hiiragi) comes across an empty street with some restaurants that are seemingly open for business. After gorging on some lavishly displayed food, Chihiro’s parents are turned into pigs and no longer recognise her. Soon after, Chihiro comes across a young man called Haku (Miyu Irino). He reveals the young girl is in another world, where she must try to get a job in a bathhouse, otherwise she will face the wrath of a witch called Yubaba (Mari Natsuki).

Spirited Away is a fascinating coming of age tale. Rather then depicting a narrative that is about the main character’s transition from adolescence to adulthood, Miyazaki instead chooses to make a satire about the working world. The result is some amusing and imaginative sequences that have Chihiro trying to steer one of the crucial aspects of adulthood.

One sequence that comes to mind is when Chihiro is being frantically instructed to get a herbal soak tag for cleaning a particularly dirty area. After being briefed by a co-worker, the character turns round and asks quite innocently- “What’s a foreman?” The moment is a typical instance of feeling overwhelmed when first starting  a new job and putting it through a heightened prism. At the same time, Miyazaki does make some quite potent points about the absorbing nature of work place culture.

After being persistent in asking for a job, Yubaba grants her wish to work at the bathhouse. However, the catch is that Chihiro has to sign away her old name and identity (in a sense). With this plot point, Miyazaki is commenting on how one’s job can be so all consuming that you lose your individuality in the process, as you sign up to become part of a corporate will.

This aspect also extends to being the emotional centre of the film. The second half changes from Chihiro’s workplace tribulations to a quest to help revive an injured Haku. The conclusion of this results in Haku finding out his former name and identity after years of being Yubaba’s apprentice. Much like the relationship between Sen and Ashitaka in Princess Mononoke, the central pairing in Spirited Away is sweet, not only for what each character sees in one another, but also for the potentiality for their friendship to blossom in a new way.

Cinematically, Miyazaki excellently conveys the sheer daunting nature of the world that Chihiro finds herself in. Many of the shots are low angled, making us feel as though we’re seeing events from Chihiro’s point of view as we feel tiny within the environment. But this is also quite effective for the world building. Details loom large and pervade our senses with overwhelming power.

In fact, the best moments of filmmaking in Spirited Away are the ones where Miyazaki plays around with scale. One scene is when Chihiro stumbles upon Kamaji (the bathhouse’s boiler-man) who has four extra arms. Throughout the scene, the audience’s perspective is played with as the character multitasks in getting his workers motivated, retrieving items from the high shelves and talking to Chihiro.

The film is also filled to the brim with striking and memorably drawn characters. The most interesting is a tall spectral figure who wears a mask and goes by the name of No-Face. With his seemingly neutral expression, he seems like a character that’s inspired by Japan’s Noh Theatre tradition. However, he’s a also crucial side character who embodies the theme of finding your place within society (via the work place).

The imagery is compounded by a stunning musical score. At times it’s innocent with its light piano main theme as well as playful and grand with the fully orchestrated sections.

Spirited Away is one of those essential touchstone films. It illustrates how fantasy can be a genre that takes our very mundane struggles and puts it through a lens that feels unique and poignant.

Notes from a distant observer: “Sartaj is a very eccentric fellow with a penchant for hats. He likes watching films and writes about them in great analytical detail. He has an MA degree in Philosophy and has been known to wear Mickey Mouse ears on his birthday.”
View all posts by Sartaj Govind Singh →
This entry was posted in 2020, Miyazaki May and tagged Art, Blog, Entertainment, film, films, life, Miyazaki, movie, movies, music, Reviews, Writing. Bookmark the permalink.