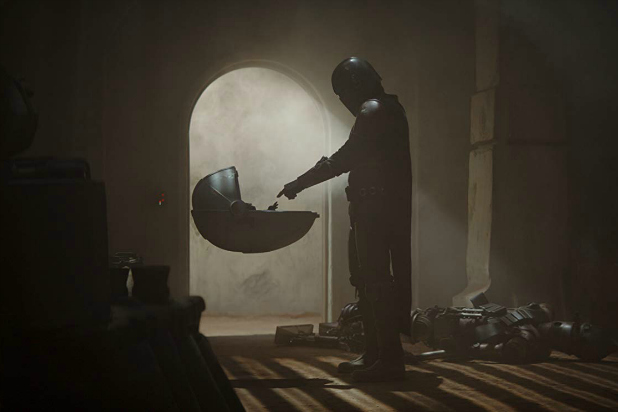 The first episode of the highly anticipated series- The Mandalorian had a quiet UK theatrical release a couple weeks ago (via Cineworld Cinemas) So, it seemed like fair game to cover it for the blog.

Television pilots are funny creations. In some ways they could represent a show attempting to find its identity as its oddities and kinks are slowly ironed out as a series goes on. Or they could be fascinating prisms to view a show’s tone, story and eventual appeal.

The Mandalorian falls squarely in the second category. The pilot is a fresh, exciting and engrossing new lens to view the Star Wars franchise. After making quick work of a several bounties, the title character- The Mandalorian (Pedro Pascal) is hired by Werner Herzog’s mysterious character- “The Client”, who tasks him with finding and protecting a 50 year old individual.

Part of the episode’s success is its world building that’s always been a staple of the franchise. There are many long takes of the Mandalorian walking through streets and going about his usual day to day business. These give us a tantalising glimpse of a post Return of the Jedi world, where few people give a second thought to some of the title character’s actions.

At the same time, the episode takes usual Star Wars elements and filters them through a unique lens. George Lucas’s infamous directing mantra “Faster, more intense” is used to illustrate the title character’s efficiency at his Bounty Hunting. In an extended sequence,  carbon freezing is unveiled like a shocking discovery in a Gothic horror movie as opposed to a heartbreaking moment of pathos. In the same vein, the Stormtrooper’s first appearance has a ghostly presence as though the title character has stumbled upon them in a dream.

But director Dave Filoni (who makes his live action directing debut with this episode) is also quite playful with the material. There’s one gag of the Mandalorian dismissing a new speeder with a droid in favour of a old, banged up vehicle to get him to his ship. The joke embodies the franchise’s constant battle between its hard worn and shiny space aesthetic. And the main character’s Mythrol bounty, whose seems like Nathan Lane doing a comedic skit in blue makeup is a wonderful reminder of the franchise’s riffing spirit.

Filoni’s best directional moment is a scene that has The Mandalorian reflecting on his past while a solid Imperial bar of silver is melted down into Beskar armor. The scene is particularly striking when Filoni superimposes moments from when he was a child (attempting to escape a war with his parents). Three blue flamed stripes reflect on his helmet and could represent his fury at his circumstances. The moment is a great visual echo to the scenes in the movies where masked characters appear all too human in their struggles.

Pedro Pascal is impressive in a near silent performance that relies on a precise stillness and efficiency in his physicality. Through the course of the episode, these qualities slowly fade to illustrate the character’s uncertainty (particularly when attempting to tame a Foal). However, Taika Waititi steals the episode with a fantastically deadpan turn as a droid bounty hunter (IG-11) who always seems eager to self destruct.

While it’s too early to call out themes, I will say that there’s some fascinating bread crumbs in the episode to guess at a few. There’s a sense that the title character is going to become a local myth as he attempts to clear a territory of mercenaries and other troublemakers (alluded to by Kuiil who grants passage to the title character’s mission area). In this way, the mythical staple of the series is retained.

However, this idea could become larger as Werner Herzog’s Client hints at the restoration to the natural order of things after the Empire’s tyranny. With what is glimpsed about the Mandorlarians, they seem like an underground tribe who are considered myths and legends.

Perhaps, with the central character’s actions and Kuiil’s prediction, the title character and his group go from fabled characters of folk lore to known figures that inspire a galaxy to hope again (albeit on a small scale). Either way, it will be interesting to see how showrunner, Jon Favreau, plays with internal myth and a sense of innocence (with Baby Yoda) in upcoming episodes.

Notes from a distant observer: “Sartaj is a very eccentric fellow with a penchant for hats. He likes watching films and writes about them in great analytical detail. He has an MA degree in Philosophy and has been known to wear Mickey Mouse ears on his birthday.”
View all posts by Sartaj Govind Singh →
This entry was posted in 2020, Rare Posts, Review, Reviews and tagged Baby Yoda, blogging, Disney, Disney Plus, Jon Favreau, Mandalorian, Pedro Pascal, Review, science ficition, Star Wars, The Mandalorian, tv. Bookmark the permalink.