Concise Review: Hunt for the Wilderpeople (2016) 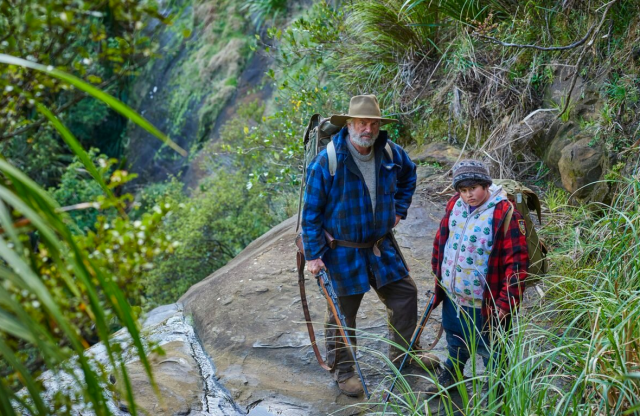 Taika Waititi’s Hunt for the Wilderpeople is a heartening film that captures life in all its wondrous, macabre and awkwardly humorous turns. The picture is a marvellous marvel comprised of small moments that capture a rare sense of authenticity. Moreover, like Waititi’s previous directorial effort- What We Do in the Shadows, the picture has a notable affection for its characters, while also showing them at their most expressive, raw and downtrodden.

Shadows employed a documentary style that relied on natural lighting, lavish set design and stock footage in reinforcing its vampire’s domestic plight. Waititi comfortably widens the scope of his filmmaking canvas for the tale of a pop culture savvy teenager and cantankerous old man’s escape from child services across the New Zealand countryside.

Despite the picture primarily being filmed with the long-standing technique of a single-camera setup, cinematographer Lachlan Milne still manages to craft shots filled with detail and a sense of place. Most of these come from the film being shot on location in the New Zealand bush. As captured on film, the long and unwinding forest is dangerous, magical and picturesque. There is one particular scene where our two central characters look engulfed by the woods, which reinforces Waititi’s wise choice not to utilise soft focus in a lot of the shots in the film.

Finally, Hunt for the Wilderpeople is engaging because its cinematic references imbue the proceedings with a humorous edge and grand weight. For example, there is an exchange at the tail end of the picture when the head child welfare worker Paula (Rachel House) and Ricky (Julian Dennison) equates herself to the Terminator and her target to Sarah Conner from the first James Cameron picture. The moment accentuates her resolve and the stakes of conflict in a wry, amusing manner.

However, the most crucial scene that is indicative of this quality is when Ricky says to Hec (played with great subtlety by Sam Neil) that he wants to be a gangster in the vein of Tony Montana from Scarface. The aged man retorts angrily about the dangerous of the forest, and how the young man could not even survive against the wild elements lest being a gangster. The moment is a beautiful microcosm of the film’s natural ability to make moments feel life-affirming, comical and genuinely touching. Hunt for the Wilderpeople is retroactively my favourite film of 2016, a truly bold film that proves Cinema is still very much alive.