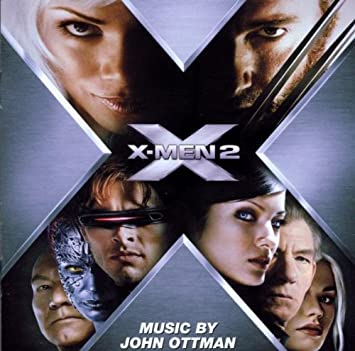 In the context of modern superhero scores, X-Men 2 appeared on the scene like a breath of fresh air. Despite the 90s X-Men animated series having a dedicated theme (via the electrifying and energising intro music), superhero movies by and large did not have team based themes. You’d have to go back to the 1966 Batman movie for something close or even the serials before that. Whilst Micheal Kamen’s score for the 2000 original X-Men could be considered a first in this regard, the score proved to be severely compromised, with much of the theme based material scrapped in favour of atmospheric electronic music.

The score for X-Men 2 is cut from the same cloth as John Williams’s and Jerry Goldsmith’s movie scores, insofar as being a stunning melodic effort with a heavy reliance on themes and motifs to tell its story. Returning to the score was a pleasant and surprising experience, due to realising just how ambitious the score is in its musical material.

My favourite track of the score is the first one, entitled- Suite from X2. On soundtracks, these tracks typically serve as a glossary for the major themes throughout the film (or in the case of a sequel, the new themes composed for that film). However, it’s quite telling how much is missing from this track. Mystique’s slinky and alluring harp motif did not make the cut. Neither did Nightcrawler’s reflective and sad string theme. Or even, Magneto’s imposing and deep choral based music. However, what remains on the track is quite an excellent encapsulation of the score’s ability to move and sweep the listener.

The track opens with the X-Men theme. There are two parts to the theme. The first aspect has this quiet and almost searching quality that gives the impression that the cosmos itself is being explored for extraordinary beings. There’s then this heavenly choral part that is almost a response akin to a collective voice crying out in one united voice. This part is tight and controlled to illustrate the unity of the collective. The track then launches into the second and more well known aspect of the X-Men theme.

The percussive and string led aspect of the theme is an adrenaline pumping march for the super team. It paints a picture of a group that is equally committed to organising and fighting as much as seeking out and helping mutants in need. The theme ends with a calming response to that first aspect insofar as the choral element is concerned. It acts as as a soothing and compassionate presence to evoke someone in fear who is being heard and nurtured.

Despite only appearing in three movies in the franchise, John Ottman’s theme for the X-Men is as indelible as John Williams’s Superman theme and Danny Elfman’s Batman theme. I think that’s in part to the theme illustrating the duality of the team. They seek out and help mutants who feel lost while also assembling to fight the threats that plague human and mutant kind.

At the same time, I’m also reminded by something Richard Donner said about Williams’s Superman theme. In a behind the scenes documentary discussing the music, he said- “And as soon as Superman came on the screen, I swear to god if you listen carefully, the music speaks the words.” In the same vein, I think during the action part of the X-Men theme, you can hear the music saying we’re the X-Men. Perhaps Donner was onto something there.

The rest of the track is dedicated to two additional themes. The first is Jean Grey’s theme. As presented within the track, it tells a compelling story of someone who constantly doubts themselves but then is able to rise above it and transcend to something higher. The first part of this story is conveyed via a light piano motif that conveys Jean Grey’s uncertainty with sobering power. The second part features a heavy use of strings as the character sounds like she’s gaining a better sense of herself as the music illustrates the feeling of climbing. Eventually, the third part culminates in a light use of choral that has a bit of religiosity to it.

The third and final musical element of the track is Pyro’s theme. In a featurette that focuses on the score, John Ottman says the following about the theme- “I wanted to have, in a odd way, some sense of longing in {Pyro’s} theme.” This yearning quality is musically conveyed in long held use of strings. But what’s interesting about the presentation of the theme in this track is that it feels like Pyro is having an internal debate about what side he belongs to. There’s this ominous use of choral that’s juxtaposed with the choral aspect of the X-Men theme. In the context of the track, the debate is never settled, but the track “Playing with Fire”alludes to his brutal police attack and his eventual siding with Magneto.

Overall, Suite from X2 is a rich and interesting prism to view the score for X-Men 2. It illustrates Ottman’s commitment to make heartfelt themes that illustrate humanity, internal conflict and duality, much like the 2003 film does within its running time.

Notes from a distant observer: “Sartaj is a very eccentric fellow with a penchant for hats. He likes watching films and writes about them in great analytical detail. He has an MA degree in Philosophy and has been known to wear Mickey Mouse ears on his birthday.”
View all posts by Sartaj Govind Singh →
This entry was posted in 2020, Comic Book Movies, Marvel, My Favourite Track and tagged blogging, Cinema, Entertainment, film, films, life, lifestyle, movie, movies, music, Writing, X-Men. Bookmark the permalink.