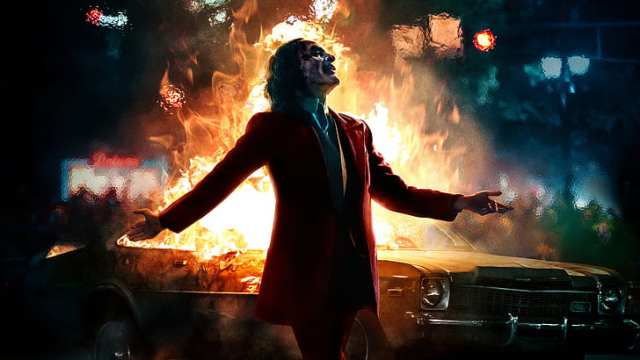 Whether you think Joker is a potent social parable for our times or a toxic slog, there’s no denying its power to linger and spark conversation (no matter what side of the debate you fall on). While the first viewing left me feeling quite stunned and impressed, I did also have some questions.

The political aspect was a contentious point for me, feeling rather empty, hollow and existing purely as an excuse for the Joker to reign supreme in chaos. On my second viewing, the political dimension was quite apparent to me. At times, it reminded me of Frank Miller’s handling of topical issues in The Dark Knight Returns (1986). In that story, the media is omnipresent, existing as a satirical Greek chorus that savagely takes down pop psychology and impotent politicians. In Joker, the media is equally prevalent, whether through headlines in newspapers, radio bulletins or television reports.

In fact, news reports spin Arthur’s initial murder of three young men as a sentiment of the impoverished denizens of Gotham striking back against the rich. Thomas Wayne’s comment about these sort of people being clowns only adds fuel to the fire. In this way, the news almost becomes like a stand-in for social media, a sometimes overblown and escalating exercise in hyperbolic sentiment.

There’s also a curious scene later in the film where a good number of Gotham’s elite (including Thomas and Martha Wayne) are gathered to watch a charity screening of Charlie Chaplin’s Modern Times. When Arthur sneaks in and catches a glimpse, they’re all laughing at Chaplin’s antics. In the brief scene we see, the tramp is blinding stumbling around on roller skates. This scene could be interpreted as the elite laughing at the poor, equating them with the Tramp insofar as like the character, they’re blind to the persistent circular nature of their plight.

On this viewing, the scene in which Arthur is told that the funding has been cut for the social service, including access to his medication, echoed the austerity cuts that the UK Conservative Government has been administrating since 2010. The ideological cuts that were pursued to keep the deficit down hit many public sectors and welfare payouts, including disability benefits and mental health trusts. When Arthur’s counsellor says “They don’t give a shit about people like you”, the line resonated with a chilling real-world truism.

The other fascinating aspect of the film is whether or not Arthur is the actual Joker or merely a man whose actions will one day inspire the Clown Prince of Crime to emerge. I think this is the real Joker. Crucially, the screenwriters opt to make Arthur a delusional man, something that’s in keeping with Joker’s character, particularly in The Killing Joke.

The way the film dances around the Batman mythos also lends credence to this point too. In the middle of the film, Arthur meets Bruce Wayne. Throughout their encounter, he attempts to make the young boy laugh and smile with various magic tricks. Wayne is suitably unimpressed. Arthur then resorts to making Bruce smile by shaping his cheeks and mouth into a grin. The scene is an interesting illustration of Joker’s persistent attempts to break Batman’s serious and sullen demeanour, filtered through a unique lens.

The ending of the film adds an interesting wrinkle to this theory too. While talking to his psychiatrist, Arthur says he’s just thought of a joke. The film then cuts to a scene of Bruce Wayne standing alone in the alley with his dead parents, who was gunned down by one of the clown protesters. When asked to deliver this joke, Arthur refuses because she won’t get it.

The whole film could be read as Joker imagining a situation in which he is indirectly responsible for creating Batman (hence why he says to his therapist that his joke is not funny). The joke is only funny to him because he knows who that little boy grows up to be.

The very last scene that depicts Arthur walking with bloody footprints across a room with Frank Sinatra’s “That’s Life” playing, seems like a Joker esque action, taking something innocent and twisting it to make it appear corrupt. In this instance, Sinatra’s cheery, life-affirming tune is used to cement to Joker’s full transformation. Even some of the lyrics fit Joker’s delusional state of mind- “I’ve been a puppet, a pauper, a pirate, a poet, a pawn and a king.”

The final moments can also be read as a cap to Arthur’s character arc insofar as changing his mindset from looking at his life as a comedy as opposed to a tragedy. This is a point that Arthur is subtly trying to get throughout the film. When his counsellor looks at his joke book for any written thoughts, she is struck by one line. She repeats it out loud- “I hope my death will make more sense than my life.” In the book, the word sense is omitted in favour of cents, speaking to Arthur attempting to frame his life and mindset as a joke.

Joker is a potent creation of societal indifference, upper-class apathy and mental anguish. The film is about someone who’s not seen, heard and discounted at every turn. From that brew, a man emerges to be seen as one of society’s most dangerous individuals. In the Joker’s mind, that’s the greatest joke of all, and in ours, it’s a gut-wrenching tragedy.

Notes from a distant observer: “Sartaj is a very eccentric fellow with a penchant for hats. He likes watching films and writes about them in great analytical detail. He has an MA degree in Philosophy and has been known to wear Mickey Mouse ears on his birthday.”
View all posts by Sartaj Govind Singh →
This entry was posted in 2019, 2019 Films, Comic Book Movies, DC, Editorials and tagged blogging, Cinema, Comic Book Movie, Comic Books, DC Comics, film, films, Joaquin Phoenix, Joker, movie, movies, opinions. Bookmark the permalink.