Brief Consideration: Under the Shadow (2016) 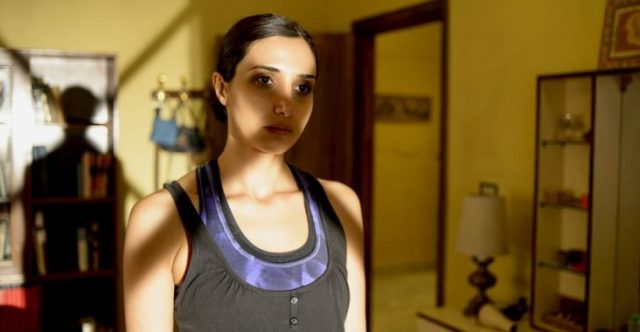 In his feature film debut, writer/director Babak Anvari demonstrates an acute awareness of the underlying horror of day to day anxieties. Set in the middle period of the Iran-Iraq War, when Iraq systematically targeted major cities of the neighbouring county through aerial warfare: (War of the Cities), Under the Shadow depicts the struggling survival of a disgruntled mother Shideh (Narges Rashidi) and her young daughter Dorsa (Avin Manshadi) in the midst of a missile strike directed at Tiran.

A scene where Shideh is in bed and the camera is tilted to show her parallel with a wardrobe and the shadow of a taped up window encapsulates the picture’s sly slanting of horror movie conventions: namely the emergence of the supernatural elements of the story.

Throughout the film, there are frequent references to the legend of the Djinn. According to a story, “The winds refer to mysterious, ethereal and magical forces. Where there is fear and anxiety, the winds blow.” Consequently, the movie has this tantalising ambiguity where each strange occurrence could be the result of the brewing war-torn tension or something genuinely sinister.

One plot point has an ageing neighbour who dies in the aftermath of a missile coming through the ceiling of his house. The death could be interpreted as a heart attack or something much more malevolent. As a character says part way through the film- “People can convince themselves anything’s real if they want to.”

Ultimately, Anvari has crafted an engrossing chamber piece of interpersonal strife that touches on the fear of parent and child resentment; while also representing the overarching uneasiness of the central wartime conflict, which engulfs the narrative like an inevitable and unruly purging fire. Under the Shadow is a masterful exercise in minimal film-making and pertinent storytelling whose timely cultural edge lend it with a potent horrific power.

Notes from a distant observer: “Sartaj is a very eccentric fellow with a penchant for hats. He likes watching films and writes about them in great analytical detail. He has an MA degree in Philosophy and has been known to wear Mickey Mouse ears on his birthday.”
View all posts by Sartaj Govind Singh →
This entry was posted in 2016 Films and tagged Babak Anvari, Halloween, Horror Movie, Iran, Iranian Horror, Iraq, Narges Rashidi, Tiran, Under the Shadow. Bookmark the permalink.