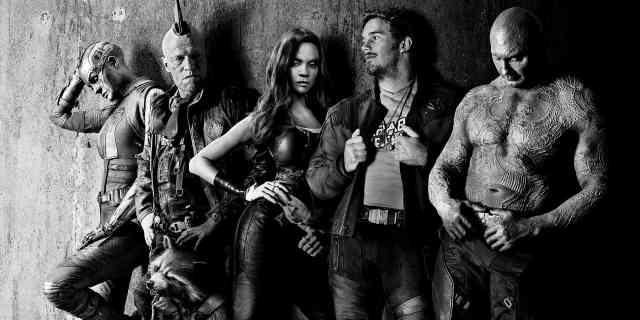 Writer/Director James Gunn makes films with the eternal optimism of a nine-year-old, who desperately attempts to get two identical magnetic poles to attract one another. Often his movies contain contrary elements that depending on the subject matter and genre sensibility; either beautifully harmonise or result in a woeful mess. Guardians of the Galaxy Vol. 2 represents a further division in this reading of the director’s work; namely the stark contrast between his low budget endeavours and blockbuster fare.

His indie pictures are like slyly crafted cinematic Jenga games, where one misstep results in a spectacular collapse of the entire construction. In particular, Gunn’s 2010 film Super fails due to a shrugging nihilistic subversion of superhero fiction; it takes the bestowing power motif to a bleakly delusional endpoint, and attempts to synthesise it with a romantic edge in an intrinsically whiplash-inducing ending.

As a result of the canvas being bigger Gunn’s sensibilities are let loose like an energetic and ravenous Tasmanian devil. The result can be an unusual blend that fuses contemporary tentpole moviemaking with old Hollywood craft. In remunerating on the original picture, it is incredible to conceive how much Gunn owed to Sergio Leone. (indeed, Gunn cited the Italian director as a source of inspiration in an interview with Elvis Mitchell in 2014) Much like Leone, Gunn’s close-ups were striking in their detail, immediacy and emotional heft. While Gunn did not use the widescreen format to depict a mythical shoot-out, he nevertheless employed it to interesting effect. In the jailbreaking sequence, Gunn juxtaposes Rocket’s (Bradley Cooper) oral plan of escape with Groot (Vin Diesel) enacting a separate action that undermines his partner’s intentions.

Most notable of all is Gunn’s incorporation of music in the Guardian’s films. In a recent social media post, the director said “Tyler {Bates} (the film’s composer) creates the score BEFORE we shoot the movie. He writes the music from the script, and we play the music on set while we shoot so the actors and camera crew know exactly the tone we’re setting, and so that the music is an organic aspect of the film.” The process of music being used during production harkens back to Ennio Morricone’s scores being used on the set of many Sergio Leone films.

These cinematic flourishes accompany a visual scheme that is not beholden to film. Instead, Gunn wholeheartedly embraces the digital revolution and the potential imaginative power of computer-generated imagery. Though, a lot of characters in the films are made with the same imaginative, practical spirit of the canteen scene in Star Wars. Gunn combines this with a postmodern snark, that is more likely to call out the absurdity of its extraordinary galactic sights, rather than longingly look upon them with awe and wonder.

With this in mind, the audience’s enjoyment of Vol. 2 will depend on how cool they find the idea of David Hasselhoff rapping in a seventies disco/eighties power ballad about the title characters. At it’s worst the film is a bloated, floundering and an occasionally adrift piece of work, that has all the terrible qualities of a sequel. In many ways, it is bigger, stupider and much flimsier.

Nevertheless, there is an undeniable richness to the picture that remarkably improves upon its predecessor. If the original presented striking looking characters who were empty vessels for coolness, then the sequel provides these characters with weight, meaning and most importantly a voice. For example, Nebula (played with commendable seething hatred by Karen Gillan) has the most heart-wrenching moment of the film; as she reveals the reason for her animosity towards Gamora. (Zoe Saldana) Every time her adopted sister would win a bounty or conquest, her adopted father, Thanos would change her into a more of a cybernetic being to compete with the green-skinned being.

In its more reflective moments, Gunn’s characters do grapple with their mangled forms and internal conflicts. Rocket finds a kinship with Yondu (played with fascinating stillness by Michael Rooker) because they both present an obnoxious facade that hides the emotional and fearful sides of themselves. Drax’s (Dave Bautista) finds a sense of innocence in the course of his conversations with the naive and sweet Mantis (played with touching sincerity by Pom Klementieff). Gamora comes to acknowledge the mistakes of her past by seeing Nebula as someone who has suffered and ultimately offering her familial shoulder as well as a new purpose.

The heart of the film lies in the relationship between Peter Quill (Chris Pratt) and his father Ego (Kurt Russell). In many ways, the handling of the narrative thread is the most problematic aspect of the picture. Just as it starts becoming absorbing and poignant, Gunn cuts to a frustratingly elongated comic interlude. In fact, the film seems engulfed with them. This problem is compounded with how repetitive they become; much like ceaseless clapping at a dog show. There are only so many times the name of the blustering Viking esque ravager (Taserface) is funny. Or the many wrong things Baby Groot brings back to Rocket and Yondu, while they are in a prison cell.

Crucially, the film never gives much time to Quill grappling with his future and his inherent Demigod nature. Moreover, there should have been much more of a parallel between Yondu and Ego. While one could argue this comes later in the film; they are handled in an obnoxious manner. Most of the dramatic moments in the tail end of the film are marred by occurring during intense action sequences, and the snarky humour ruining these sustained moments of importance.

Gunn is capable of elegant paralleling. In his first film, (Slither) the gossiping nature of a quiet American town is contrasted with the central creature; whose travels across the universe cause it to postulate in a human manner. Moreover, through the creature, the people of the small town still voice their opinions and feelings of Starla Grant (Elizabeth Banks) with reckless abandon. There is a darkly comic edge to the emotional climax; as Grant and her husband’s relationship is being worked out in front of the town with a frightening new dimension. The flurry of half-whispered rumours, lies and judgement become public discourse.

Most egregious of all is the timing of Ego revealing that Peter will lose his divine essence if he dies. The moment happens when the rigged bomb in Ego’s central system is close to blowing up. Because Quill has not reflected on his identity throughout the picture, the moment loses tension and instead becomes hollow as opposed to emotionally resonating.

At the same time, the central relationship does offset a problem that persisted with the original Guardians movie. There was a goofball charm and humour pervaded that film, and it became rather tiresome after a while. However, in Vol. 2 it is used as a pretence and source of subversion. With the character of Ego, we are presented with a being who is the complete antithesis of a God. He is fair, laid-back and seems to observe the value in humanity. As he says when we first meet him, “I am a God with a lower case g.” Kurt Russell’s understated and effortless blue-collar charm accentuates this portrait. In many ways, it is an atypical Russell performance, sans the sense of buffoonish superiority, and instead replacing it with worldly wisdom.

Later in the film, this brittle portrait is shattered as Ego reveals the extent of his bleak world view. In these sequences, Ego becomes a Zeus esque figure; whose petty and all too human isolated feelings cause him to reshape the universe in his image. This is contrasted with Quill, who subverts the traditional perfect heroic figure from Greek Mythology; with a childlike attitude. This is encapsulated in his delivery of the line- “You killed my Mum and broke my cassette player.” There is something endearing about seeing deities wax about the meaning of retro pop songs and their disagreements resulting in universe-spanning consequences.

The Marvel pictures of late have suffered from their asceticism: chiefly manifested in their colour palette, that has comprised of a murky grey wash and desaturated real-world look. Fundamentally, the sequel oozes with exuberance and vibrancy that is worthy of its four coloured source material. From the gold and blue coloured palace of the Sovereign race to the rich uses of green, yellow and orange on Ego’s planet and you have the most beautiful picture in the cinematic canon.

In many ways, Vol. 2 takes on certain aspects of the original movie with an interesting effect. The opening credits sequence depicts Baby Groot dancing while his teammates are fighting a hideous monster. The scene is amusing in its wry detachment more than any single moment of the previous picture. And Gunn’s heart seems to be in a lot of the Rocket sequences. In one particular scene, he is springing a trap for many Ravagers and does it to Glen Campbell’s “Southern Nights.” There is a distinct feeling that Rocket represents a cinematic avatar for Gunn. He functions as the mastermind: spearheading the ploys and finessing them with black comedic elements, much like Gunn in all his pictures. Moreover, the change of Rocket being the one who picks the source music in the film is an amusing touch.

The most sobering moment of Guardians of the Galaxy Vol. 2 comes in its fifth and final post-credit sequence. It shows Stan Lee with some of his creations. (The Watchers) He says to them “I have many more stories to tell”, as they are walking away from the comic book creator. The scene illustrates that the Ringmaster who once opened shows with “Excelsior” and “True Believers” has been replaced with James Gunn. Even with the more problematic aspects of the picture, the circus that is the Marvel Cosmic Universe is in good hands.

Notes from a distant observer: “Sartaj is a very eccentric fellow with a penchant for hats. He likes watching films and writes about them in great analytical detail. He has an MA degree in Philosophy and has been known to wear Mickey Mouse ears on his birthday.”
View all posts by Sartaj Govind Singh →
This entry was posted in 2017 Films, Comic Book Movies, Marvel, Review, Reviews and tagged Blog, blogging, Chris Pratt, film, films, Guardians of the Galaxy, James Gunn, life, MCU, movie, movies, Volume 2. Bookmark the permalink.