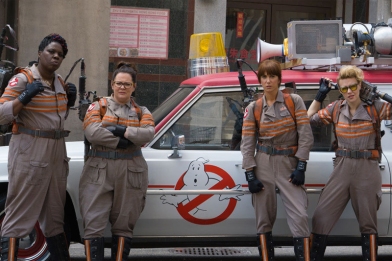 Ghostbusters is an affectionate remake of the original 1984 picture of the same name. It succeeds in crafting a unique interpretation of the same material while also allowing for subtle homaging and subdued franchise building. The primary virtue of the picture comes from its improvisation, which allows scenes to have an archaic energy and inherent longevity. From jokes involving a play on words to do with a classification of a pet to a tangential conversation about Patrick Swayze’s filmography; this new Ghostbusters film succeeds in its ad-libbing framework.

Kate McKinnon emerges as the most capable and strongest actress in this comedic setup. At times she mole like with her physicality, which is illustrated in moments where she randomly pops up in the middle of tense encounters. She also has an idiosyncratic manner of delivering her lines. These vary between a casual detachment and sounding like an excited teenager who is in the midst of expressing a perpetually awesome experience.

Moreover, the third act of the film has an excellent sense of wonder and awe as all the ghosts of America’s past are unleashed upon New York City. Director Paul Feig accentuates this feeling with his free moving camera moves that has many top down shots where we are witnessing the spirits like children who believe the world is gigantic and boundless. It was refreshing to experience a finale that is not marred by exhaustive action.

The only problem with the film is that it fundamentally does not reach the comedic and emotional heights of Feig’s 2011 picture Bridesmaid. Furthermore, it lacks the intrinsic universality that resided in that picture as it explored the changing nature of friendship amidst marriage and climbing the social ladder. Nevertheless, Ghostbusters still retains a unique sense of care, which is commendable in today’s oversaturated summer movie cycle.