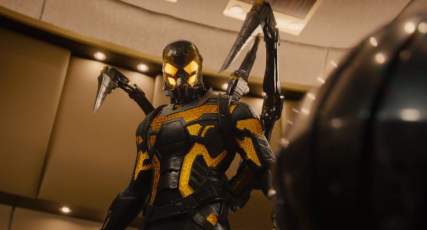 Out of all the Marvel films that have passed through the studio grind, Ant-Man surprisingly holds the most interest and humanism. The curiosity does not just stem from the behind the scenes troubles, in which famed British director, Edgar Wright quit over creative differences and the ensuing production problems that occurred afterwards. There is no doubt that Wright’s unique cutting, editing, and visual sensibilities would have made the frequently clunky exposition scenes more exciting.

However, Ant-Man primarily succeeds because of its inherent human focus. The film works as a compelling drama with the super heroics almost feeling incidental, like if one met a compelling person at a firework show. The colourful balls and sparks of a Roman candle would only be a temporary distraction from the meaningful and stimulating human connection being made.

Halfway through the film, Hank Pym (Micheal Douglas) says to Scott Lang (Paul Rudd) “It’s not about saving our world, it’s about saving theirs.” The line is indicative of the personal stakes that the film has as its central virtue. Pym sees himself as a failed father but sees that there is still a chance for Lang not to be in the eyes of his daughter- Cassie.

Moreover, at its heart, the film is about a man’s legacy, who he chooses to protect it and the reasons for why he wants its hidden from the world at large. From here the film takes a fascinating examination of Pym through the prism of its protagonist and antagonist. On the one hand, there is Darren Cross, who Hank nurtured and mentored. Pym remarks that he saw himself in Cross, but too much of himself. Cross is ambitious and ruthless, almost representing a younger version of Pym with the same characteristics.

On the other hand, there is Scott Lang, who represents a figure in which Pym can feel redeemed through, not only from the vantage point of fatherhood. But also, his legacy, which is tied to his wife and daughter. Douglas’s stern manner contrasted with Rudd’s adolescent; schoolboy nature makes Pym and Lang’s interaction amusing and meaningful.

Finally, the picture still has the usual trappings of a Marvel Studios film, excessive humour, wedged in references and liberal cribbing of prior installments. The difference is in the execution. For example, the action sequences have a sense of fun and cleverness due to the use of scale. The finale turns a child’s bedroom into a dangerous and mischievous place as toy trains, and ants become amusing sources of impending doom.