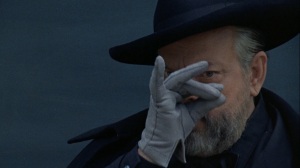 F for Fake, the last film that Orson Welles made is a witty, poignant and fascinating examination of the nature of charlatanism and art. While one could spill ink on the reading that it is cinematically revolutionary, on the count of it being considered a cinematic essay, this will be left undiscussed for this piece.

The underlying ideas of the film are engaging and paint a compelling portrait of Welles and his lasting legacy. On the surface, the film explores the previously mentioned themes by chronicling the exploits of the famous art forger, Elmyr de Hory, whose notoriety rose substantiality due to his biographer, Clifford Irving.

Welles claims that the first hour of the picture is hundred percent true based on the available information, even amusingly in writing. The declaration sounds like a sly underhanded trick in of itself, due to the truth being presented by Hory and Irving, who intrinsically do not see themselves as wrong in their beliefs at all.

Their musings and story do raise some interesting questions that permeate the rest of the film. For one, are the so-called experts, infallible? If they are not, what does that say about how art is judged? Is Hory, really a tracer, or an artist in his own right?

These quandaries truly become potent when Welles turns the focus away from Hory and Irving and becomes self-reflective about his long career. We are treated to many stories, where Welles illustrates why he is a charlatan, including the surreal and hysterical reaction to his famous 1938, War of the Worlds radio broadcast.

However, the masterstroke of the film comes at the end. Welles expounds upon a forger of Picasso’s paintings, who debates with the famous painter on his death bed, the new found fame he will acquire. The forger and dying man turn out to be fictitious. The section illustrates how an audience can be made to believe in whatever the filmmaker wants to them believe because of the convincing nature of the storyteller and the ignorance of the situation in question.

Irving in one of his many interviews remarks that what truly makes an artist is that they have a vision. F for Fake is a testament that Orson Welles is a true cinematic artist for all time. He has delivered his most personal film to date with his usual wit, insight and commanding grasp of the cinematic language that has always made him stand out as a towering figure in film history.