If you wanted an encapsulation of James McAvoy’s range as Charles Xavier, then this scene delivers in spades. Awkward, amusing, heartfelt and even flirtatious, McAvoy deftly illustrates Xavier’s hard but necessary choice to erase Moira McTaggart’s memory of him and mutants at large.

At the same time, the scene is also a post-modern response to Superman erasing Lois Lane’s memory in Superman II. This scene takes that silly and unexplored plot point and illustrates its dramatic weight, with Xavier having to put personal desire aside for the good of the larger cause. The lingering moments of Xavier reflecting on the fact he carries memories of times that Moira does not remember is particularly resonating. The scene is also great for its small details, such as the picture of Ronald Reagan in the background as well as Xaiver’s casualness at freezing an entire room of people.

One of X-Men 2’s greatest strengths is the set pieces it creates out of some of the mutant powers. While the opening Nightcrawler sequence is a visceral treat, I prefer Magneto’s escape for what it says about the character. From the beginning, Erik Lehnsherr is like a predator slowly circling its prey with the discovery that his security guard has too much iron in his blood.

From here, the sequence is like a series of cinematic splash pages that could have easily graced a comic book issue. Out of the blood that Lehnsherr extracts, little metallic balls are formed that brake the glass of the prison. Then Lehnsherr creates a single metal disc that he uses to travel to the entrance of the prison. Aside from being an amusing and cool display of power, the scene best illustrates Magneto’s lofty sense of self, particularly when travelling on the self created metallic disc.

In this moment, Ian McKellen (particularly in his physicality via loosely crossed arms) plays the part as though he’s a genie that’s just been released from a lamp, and is ready to laud his superiority over the poor unfortunate soul, who has just woken him up.

This scene makes Logan interesting again by pointing out the cracks of his seemingly immortal existence. The old man (Yashida) was saved by Logan during the atomic bombing of Nagasaki. To show his gratitude, he offers Logan a chance to become mortal via a transfer of power, so he can carrying on living. Yashida equates Logan to a Rōnin (a Samurai who is wandering through life without purpose because of the loss of a master). On some level, the audience could agree with this observation, based on what we’ve seen of the character during the first act of the film.

But there’s also an inherent appeal in this process based on how we’ve collectively seen how much pain the character has gone through (in the movie series). Presenting a central hero with their mortality is a fascinating conundrum for a superhero movie. The scene is also excellent for reminding us how versatile Wolverine is by paralleling his plight with a Japanese archetype.

If Xavier’s reunion with Moira is an illustration of the personal cost of his powers, then his meeting with his older self is an attempt to expound upon the central virtue of his ability. Charles has the power to directly empathise with the people he encounters by feeling their pain. But rather then be weighed down by this burden, the elder Charles appeals to his younger self that this is a chance to hope. His optimism allows people to overcome their pain, become better people and essentially choose to fight for humanity. Punctuated by Bryan Singer’s psychedelic direction and John Ottman’s emotionally ethereal score, this scene is a justification for Xaiver’s place in the franchise and his soothing, peaceful worldview.

1) Peace Was Never An Option 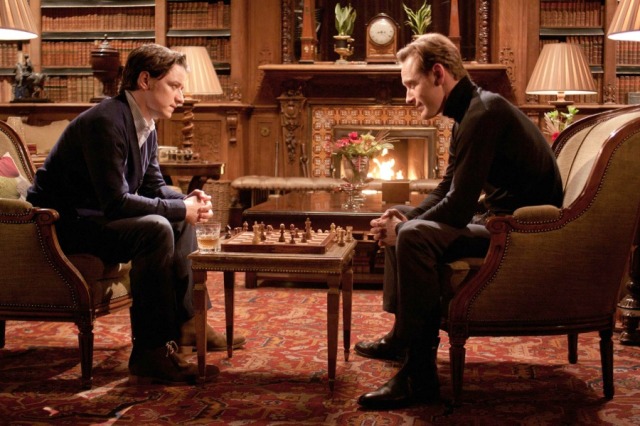 Simply put, this scene between Charles and Erik distils their worldviews and the central metaphor of the series (a persistent chess game between the two individuals). Much like the film itself, this scene gives the floor more to Erik for his continuing disillusionment with humanity and presumption of mutants being the next stage in human evolution. Even Erik’s aggressive chess move of taking one of Charles’s pieces showcases his violent resolve.

The scene is excellent for illustrating that Charles’s and Erik’s perspective being cemented by the people they’ve met: Shaw embodying the worst of humanity and Moira representing the best of it. The scene builds up to the sublime last line- “Peace was never an option.” It speaks to an alignment of Erik’s internal mindset and external cause. He will never feel peace for killing Shaw just as peace was never going to be the means of his fight for mutant kind.

Notes from a distant observer: “Sartaj is a very eccentric fellow with a penchant for hats. He likes watching films and writes about them in great analytical detail. He has an MA degree in Philosophy and has been known to wear Mickey Mouse ears on his birthday.”
View all posts by Sartaj Govind Singh →
This entry was posted in 2020, Lists, Marvel and tagged blockbusters, Blog, blogging, Comic Books, comics, film, films, life, Marvel, movie, movies, X-Men. Bookmark the permalink.