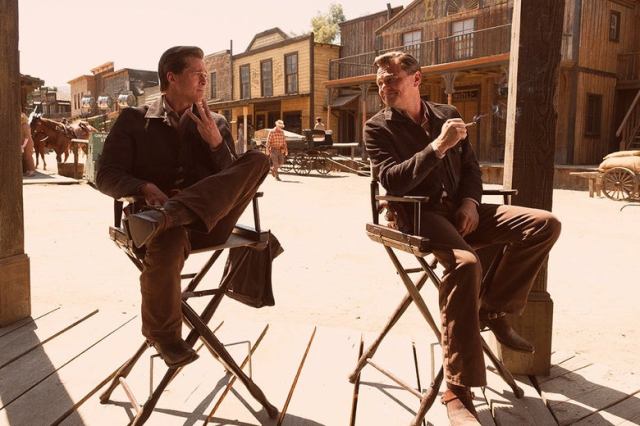 Once Upon a Time…in Hollywood is a majestic and mature work. It’s the sort of film that feels like an intimate confession is being delivered on a grand stage. Taking place over the course of several months in 1969: the film is about an ageing actor- Rick Dalton (Leonardo DiCaprio) who is dealing with the changing nature of his career as a heroic Western protagonist and the fabric of the industry.

Told almost entirely in real-time, Tarantino’s latest tips its hat to Sergio Leone’s Once Upon a Time in America. That film concerned itself with the relationship between memory and time, with Robert DeNiro’s aged character walking in parts of a familiar city, immediately struck by a place or object that causes him to reflect on moments from his past. Much like Leone’s film, there are many moments in Hollywood where sequences of memory occur during mundane situations. One scene that comes to mind involves Cliff Booth (Brad Pitt) fixing his friend’s roof and reflecting on why he got fired as a stunt man.

However, Hollywood is at its most engaging in its scenes of malaise with its characters expressing the personal goals that have eluded their grasp. Some of these instances of confession are often contrasted in interesting ways. One early scene at the Playboy mansion sees Steve McQueen (Damien Lewis) acknowledging why Sharon Tate (Margot Robbie) would never go for a guy like him. He ends his lament by saying he “never stood a chance.” Later on, Dalton says the same thing when talking to a co-star about how he lost the role of Captain Virgil Hilts in The Great Escape to McQueen.

In this way, the film has most in common with Tarantino’s third film- Jackie Brown insofar as between the double-crosses and tense dialogue exchanges, the film gives time for its characters to ruminate about ageing and life aspirations. At the same time, Hollywood marks a departure for Tarantino. His films usually illustrate his characters taking on a persona and grappling with them like an actor interpreting a part in a script. Hollywood sheds this artifice in favour of showcasing the pure unbridled transformative experience of seeing an actor play out a scene. One sequence in the middle of the film, depicting Dalton in bad guy mode on an episode of “Looper” soars in this regard.

Dalton feels like a composite post-modern creation. He’s the sort of journeyman actor that Tarantino would have raved about and cast if he existed, speaking to the director’s tendency to celebrate aspects of obscure genre fare. But he also exists as an ironic mirror for DiCaprio. Much like the character is grappling with going from a youthful hero to being relegated to the villain of the week on various televisions shows, DiCaprio struggled with being taken seriously after being the youthful romantic lead for years.

DiCaprio’s best moments as the character are when these parallels come to the fore, such as an early scene when he’s talking to Hollywood producer- Marvin Schwarz (Al Pacino). When Schwarz paints a picture of Dalton’s future, DiCaprio reacts with a sense of uneasiness, almost as though the truism of his early career are aligning with the character.

However, Brad Pitt steals the show in a captivating near-silent performance as Dalton’s stunt double and long-time friend- Cliff Booth. Booth engages in the same way as some of the male characters that have pervaded Tarantino’s films- seemingly amiable guys who have a hidden capacity for violence. Through the course of this film, this Tarantino archetype is subverted by a potent ambiguity of whether the stunt man truly enjoys the violence he commits. Pitt’s performance walks a fine line between pleasant and dangerous in a way that elevates the character to one of the director’s best.

Despite having less to say than any of Tarantino’s other female characters, Margot Robbie shines in a star turn as Sharon Tate. The character exists as an optimistic embodiment of classic Hollywood, illustrating it’s larger than life qualities and fevered dreamlike aspirations. In fact, many of her scenes, comprised of dancing to late sixties pop songs reminded me of scenes from Sleeping Beauty with Princess Aurora singing, filtered through the lens of Terrence Malick’s ethereal style.

Tate also exists as an interesting counterpoint to Dalton. In a key scene, she goes to a screening of her recent movie. While watching, she fondly remembers some of the on-set memories and innocently revels in the audience’s reactions. Tate embodies the side of Hollywood that exists at the behest of the audience, immersing them in a fantasy experience that will transport them away from everyday tribulations. In this regard, she’s portrayed without irony or complication much like how people would have seen movie stars in that era.

By comparison, Dalton is a character that illustrates what happens when the director says cut and the larger than life movie star suddenly fades and we see all the problems that engulf their daily existence. Dalton also contrasts with Tate by not caring about the audience, other than how they perceive him, and what movies will mean for career advancement, rather than mass enjoyment.

In fact, there’s a small thematic thread within the film of Dalton’s work being responsible for the violence of the Manson family. This is illustrated in a cutting speech by one family members- Susan Atkins (Mikey Madison) in which she points out that all there was on television growing up was violence. With this “brain wave,” she contends that they should attack the people who are responsible for them behaving in a violent way. At the end of this sequence, a mural of Dalton looking quite sinister is engulfed in red by a passing police siren, suggesting the actor’s violent legacy.

Although the historical revisionism is smaller in scale compared with Tarantino’s previous films, it’s nevertheless fascinating and quite poignant. By preventing Sharon Tate’s death at the hands of the Manson family, it’s almost as though the director is trying to keep the optimism of the studio system alive. In the sweet, almost Hollywood esque final moments: Tarantino believes these two disparate sides of the business can have a meaningful dialogue to keep the larger than life light, shine a little while longer.

Notes from a distant observer: “Sartaj is a very eccentric fellow with a penchant for hats. He likes watching films and writes about them in great analytical detail. He has an MA degree in Philosophy and has been known to wear Mickey Mouse ears on his birthday.”
View all posts by Sartaj Govind Singh →
This entry was posted in 2019, 2019 Films, Indie Cinema, Quentin Tarantino, Reviews and tagged blogging, Brad Pitt, film, films, Hollywood, Leonardo DiCaprio, Margot Robbie, Media, movies, Once Upon a Time in Hollywood, Pop Culture, Quentin Tarantino. Bookmark the permalink.