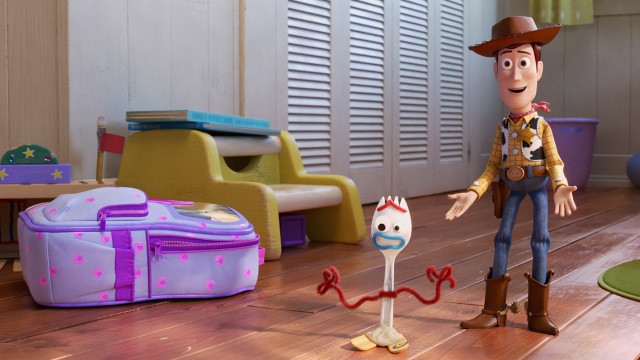 Even by Pixar’s high standards, Toy Story 4 seems like a daunting prospect. Not only was the trilogy responsible for the animation studio becoming a household name, but the films had become like a cherished memory. Viewed through the prism of a growing boy and his toy collection; the films tapped into our existential angst and a simpler time when our imaginations roamed free, courtesy of some inspired set pieces and sight gags. Toy Story 4 manages to retain these qualities in an emotional, persistently amusing and thematically rich sequel.

The film is about Woody (Tom Hanks), Buzz Lightyear (Tim Allen) and their various friends dealing with a new toy that their owner (Bonnie) has created. Appropriately referred to as Forky, the new toy has an identity crisis. He’s a handcrafted plastic spork who believes that he’s meant to fulfil his purpose as a disposable utensil. While on a family road trip, Forky (Tony Hale) becomes lost and it’s up to Woody to find him. Along the way, the resilient cowboy becomes caught up in an adventure involving a quaint antique shop, creepy ventriloquist dolls and old friend- Bo Peep (Annie Potts).

Rather than having an insular focus on one kid and the relationship they have with their toys, Toy Story 4 instead widens its lens to examine the notion of toy individuality. Having now experienced the full cycle of a toy (wonderfully illustrated in a touching montage) with Andy, Woody is challenged with the idea of not being attached to a kid. This results in an interesting inversion of the “lost toy” fear that permeated the trilogy.

When exposed to the light, the notion becomes an empowering way of life to pursue personal goals to a greater degree. Rather than be tethered to the role of being responsible for one kid’s happiness, Woody can now help toys to find a home and in the process make more people content.

In the film’s most striking cinematic moment, Bo Peep and Woody are standing up atop a stone structure overlooking a bustling fair. The sheriff looks at Peep with love-struck admiration and the sheep wrangler says to him, “look”. Peep refers to the park as we get a full view of it in a sumptuous 360-degree shot. The moment is important for illustrating that Woody’s attachment to people is so absolute that he does not stop to consider the larger world around him. Toy Story 4 is at its best conveying these visual epiphanies.

Equally as compelling is Forky. In a film series that’s had toys come out of their boxes with fully developed personalities, it’s refreshing to see an innocent and docile character. His existential turmoil carries on the themes of purpose from the trilogy in a funny and quaint way. Tony Hale brings sweet naivety within his vocal performance. In a potentially last appearance as Woody; Tom Hanks adds a world-weariness and sense of age to Woody. He comes across as a parent who has seen their child grow up and must repeat the process again. But Christina Hendricks steals the show in an adorable and touching vocal performance as Gabby Gabby.

The Toy Story films have always played in sub-genre sandboxes with ease. Toy Story 4 is no exception. Born with a defective voice box and left in an old antique shop; Gabby Gabby longs for a cherished memory with a kid she frequently sees (Harmony). The character’s story is framed like a tragic Gothic story where she’s cursed to decay into obscurity. Some of Toy Story 4’s most interesting writing is in subverting the Gothic ascetic set up of Gabby’s storyline into something that feels emotionally true and resonating.

Less successful is the film’s use of most of the vintage toys. Since the original picture, the films have varied in their success of the comedic shades that they’ve drawn Buzz with. The character encountering a mirror image of himself in Toy Story 2 was unremarkable at best. The joke of Spanish Buzz in Toy Story 3 enlivened proceedings because it functioned as a hilarious commentary on the relationships the character had with the rest of the crew.

In 4, Buzz is saddled with a one-note joke that sees him believing that his action commands are a stand-in for his conscience. The joke seeks to make the character feel quite dumb. It also makes less sense as it goes on due to this Buzz being a vintage variant who’s limited to only so many action phrases.

The rest of the crew shine less in their personalities as the previous instalments. And in some instances, the film seems to have even forgotten some of the dynamics they had, i.e Buzz and Jessie. Consequently, the old set can’t help but feel like pawns in the context of the narrative. But for all its minor blemishes, Toy Story 4 necessitates its existence by opening up its narrative to the alluded aspects of the previous films. In this way, the film is like an old toy that you rediscover and find that it has more features than you initially thought.

Notes from a distant observer: “Sartaj is a very eccentric fellow with a penchant for hats. He likes watching films and writes about them in great analytical detail. He has an MA degree in Philosophy and has been known to wear Mickey Mouse ears on his birthday.”
View all posts by Sartaj Govind Singh →
This entry was posted in 2019, 2019 Films, Reviews and tagged Buzz Lightyear, Disney, film, films, Forky, movies, Pixar Animation Studios, Tim Allen, Tom Hanks, Tony Hale, Toy Story 4, Woody. Bookmark the permalink.