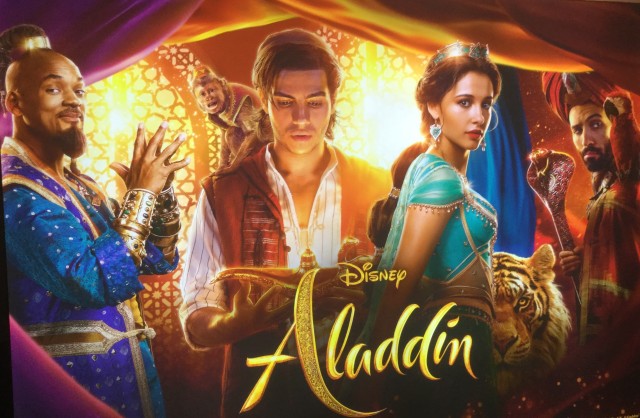 A good case can be made that Disney’s Aladdin was the first postmodern animated film. It was fully aware of its universal love story of a poor street urchin attempting to win the affections of a fair princess but decided to dress it up with a playful irreverence. It was like a manic magician had taken over the film, became bored with its earnestness and had decided to fill it with a series of amusing, fourth-wall-breaking tangents.

This quality was embodied in the character of the Genie, who filtered the entire story through the prism of a Robin Williams stand up routine; complete with impressions, erratic mood swings and sobering declarations. While some later animated features would keep this postmodern edge, often at the expense of their heart: Aladdin commendably retains a rousing sense of adventure and romance- enlivened by captivating imagery and Alan Menken’s beautifully touching score. The film was pure wish fulfilment with a raised eyebrow.

By comparison, Guy Ritchie’s live-action remake proves to be something of a mixed blessing. While it delivers on the qualities that made the original film so enchanting, it can’t help but feel aesthetically shackled by the live-action medium and clumsy directorial choices.

Much like the 1992 animated film, the live-action remake has a young male street urchin called Aladdin (Mena Massoud) attempting to win the heart of Princess Jasmine (Naomi Scott). By royal decree, she can only marry a prince and must put up with a slew of royal suitors. When the Grand Vizier of Agrabah, Jafar (Marwan Kenzari) offers Aladdin a chance to do this by retrieving an ancient lamp from a magical cave, the boisterous youth leaps in headfirst. Through duplicitous actions by Jafar, Aladdin is presumed dead but has the lamp in his possession. Once he rubs it, a blue Genie (Will Smith) awakens with the promise of three wishes.

Although sharing an identical plot as the original movie, there are some interesting diamonds within the new film’s rough screenplay. There’s a persistent attempt to emphasise the role of politics in the narrative. Agrabah is no longer an isolated kingdom and is instead part of a larger world with political allies and enemies. While the attempt to inject the story with political intrigue is alluring, it never ceases to feel hollow as the other kingdoms and their points of view (in the narrative) are abstract at best.

Despite this, it does result in some fascinating reinvention for some of the characters. Jasmine now aspires for leadership. Her frustration with being wrapped in perpetual palace protection comes from thinking that she can’t understand her people if she’s not allowed to walk among them. As Jasmine, Naomi Scott’s performance is impressive in showing the frustration of her societal role and the inherent good qualities she has as a potential Sultan. Both aspects are illustrated in a barnstorming third act speech.

Rather than being a delicious post-Tim Curry invention, Jafar is now a political climber in the vein of Petyr Baelish from Game of Thrones. He also exists as a dark mirror to Aladdin. Emerging from nothing on the streets of Agrabah, Jafar seeks power to be the most important person in the room, as opposed to seeking fame and fortune to escape an impoverished existence. Kenzari occasionally retains some of the dry wit that made the character so indelible, while also portraying righteous indignation.

As the title character, Mena Massoud brings a relatable sense of inner doubt, most evident in his scenes as Prince Ali, where he portrays a palpable sense of alienation. He also wonderfully conveys this quality in his singing, particularly in the reprise of One Jump Ahead where he sings the first few lines with a sense of hesitancy. Despite being awkward in delivering period-authentic dialogue in his first scene, Will Smith is an often-enjoyable motor-mouthed presence as the Genie, particularly in reacting to Aladdin’s cringe-worthy attempts to impress the Sultan (Navid Negahban) and Jasmine.

The live-action remake often excels in the moments where it’s a stumbling comedy of errors, often balancing the awkward humour from wrong utterances and the pure jubilation from romantic encounters. In particular, Princess Jasmine’s handmaiden- Dalia (Nasim Pedrad) gets a lot of comedic mileage in her courtship with Smith’s Genie. At the same time, the film is effortlessly sweeping in its central romance, courtesy of the chemistry of its two leads, who lend the proceedings with a sweet and sincere casualness.

Despite being swept up in its romance, the same could not be said in the film’s direction. Guy Ritchie’s directorial tendencies tend to clash with the material and make some of the musical sequences quite awkward. In particular, the staging of One Jump Ahead makes for some jarring watching. Ritchie attempts to make it like a sequence from Sherlock Holmes where Aladdin is slowing down the sequence to become an omniscient narrator of his surroundings to demonstrate how he can get past the guards. But this directorial flourish clashes with the fast nature of the song that’s meant to illustrate Aladdin’s desperate and dangerous existence.

To compound matters, the song is broken up severely for dialogue sequences that could have been moved elsewhere. The original musical number was a breathlessly delivered 1950s show tune that existed within the confines of a Jackie Chan esque action sequence. In Ritchie’s hands, it’s a sloppy and jerky mess.

In other instances, Ritchie’s slow-motion use, which did wonders for his Sherlock Holmes’ action sequences tend to come across as mockable indulgence. Even the opening tracking shot that travels the lengths of the Agrabah marketplace to the Cave of Wonders is marred by an attempt to wedge an early plot point where it does not belong.

The only sequence that benefits from his directorial hand are the film’s new musical number- Speechless. Ritchie freezes the sequence and allows Jasmine to powerfully vent to every person who has spoken down to her and how she’s no longer going to accept it.

Ultimately, the live-action remake of Aladdin is a strange dance that balances heartfelt romanticism with limiting direction. While it does expand the depth of the characters, it does not rise to the occasion of the alluded large scope in its screenplay and ends up feeling lesser for it.

Notes from a distant observer: “Sartaj is a very eccentric fellow with a penchant for hats. He likes watching films and writes about them in great analytical detail. He has an MA degree in Philosophy and has been known to wear Mickey Mouse ears on his birthday.”
View all posts by Sartaj Govind Singh →
This entry was posted in 2019, 2019 Films, Disney, Musicals, Reviews and tagged Aladdin, Disney, Genie, Guy Ritchie, Jafar, Live Action Remake, Marwan Kenzari, Mena Massoud, Musical, Naomi Scott, Princess Jasmine, Will Smith. Bookmark the permalink.