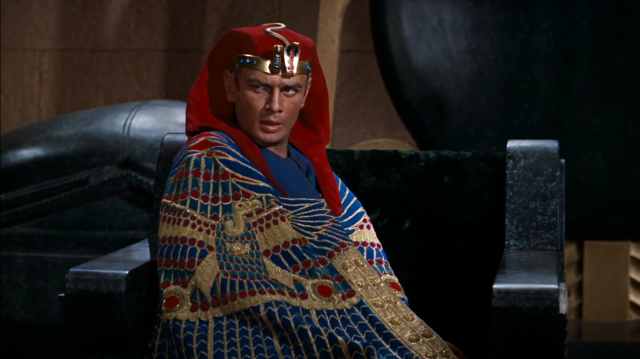 Aside from being an epic and loving adaptation of The Exodus story, Cecil B. DeMille’s The Ten Commandments is also an examination of the pride and follies of man. Yul Brynner’s performance as Rameses carries this theme as a constant throughout the picture. His arrogance and pride seep through every pore even at the expense of compassion, which comes far too late.

Even some of the film’s large scale sequences speak to this theme in a meaningful way. The last twenty minutes depict sheer fervour and debauchery in the face of a new God that the recently freed Hebrews have created. These scenes are intercut with God casting into stone the ten commandments. These moments are a fascinating study of the newly found pride that the recently freed Hebrews have acquired and the dire consequences that ensue.

However, one of the most interesting aspects of the film is the other sources it draws inspiration from, aside from the prominent Biblical texts. In the third act, Nefretiri (Anne Baxter) becomes a Lady Macbeth figure as she plies her husband’s ears full of poisonous words, which lead him on a destructive path.

Those brief scenes speak to the film’s examination of pride better than any other, as they suggest that pride is a natural state that must be kept at a constant in the service of meaningful goals. Nearly every character in the picture is after something more substantial than themselves whether its love, immortality or freedom. The film is fascinating in depicting the attempt of these goals by mere mortals.

The Prince of Egypt remains the finest animated feature of the 1990s, a decade where the genre reached unprecedented artistic and critical heights. More amazingly it is the best adaptation of the Exodus story. This is due to its sharp focus on the relationship between Moses and Ramesses, which is the film’s central focus. Aside from that, the film contains many ambitious sequences that still engage and work. There’s a dream sequence that takes place within a space of an Egyptian wall painting. It’s an excellent illustration of Moses’s emotional turmoil while harkening back to a past animation style (stop motion) and finally, something of a piece with the period that the film is set in.

Ridley Scott’s Exodus: Gods and Kings is an interesting if at times frustrating reinterpretation of the Moses story. For all the spark of inspiration such as God appearing as a child, Moses’s pragmatic and reluctant attitude towards his plight, and a compelling retooling of one Biblical set-piece; there remain huge problems. These include choppy editing that does not allow one to get absorbed in the story. Gaps in the screenplay that should have been filled. And finally, some of the performances feel like the actors are being interviewed and posing for a GQ cover as opposed to a Biblical Epic.

Notes from a distant observer: “Sartaj is a very eccentric fellow with a penchant for hats. He likes watching films and writes about them in great analytical detail. He has an MA degree in Philosophy and has been known to wear Mickey Mouse ears on his birthday.”
View all posts by Sartaj Govind Singh →
This entry was posted in Brief Consideration, Rare Posts and tagged Biblical Epic, Cecil B. Demille, Christian Bale, Exodus, Exodus: Gods and Kings, Joel Edgerton, Moses, Ramesses, Ridley Scott, The Prince of Egypt, The Ten Commandments, Yul Brynner. Bookmark the permalink.