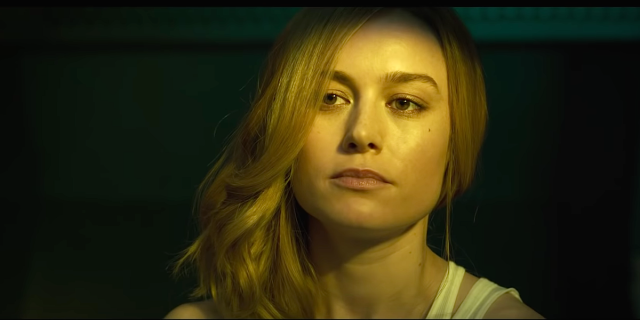 From a purple-coloured mad titan to a perpetually scowly Jeff Bridges in a giant robot suit: Marvel has had plenty of challenges that would make any superhero worth their salt, quake in their boots. However, its toughest challenge to date does not come from a supervillain causing mayhem but instead creating a female-led superhero film that also serves as a prequel to its entire cinematic canon. Despite being marred by some awkward prequel manoeuvring and action sequences that are more tiring then exhilarating: Captain Marvel is an earnest, quietly subversive and often amusing movie.

Set in the 1990s and taking place over a decade before Iron Man, Captain Marvel is about Vers (Brie Larson), who is a member of an elite military organisation called Starforce. They are tasked with wiping out the Skrulls, (intergalactic creatures who can morph into any person or object). After escaping from the clutches of their leader- Talos (Ben Mendelsohn) on an ambushed undercover extraction mission, Vers crash lands on Earth. Once there, she must race against time to prevent a Skrull invasion and find out why the planet holds the key to her past. Along the way, she teams up with a humble pencil pushing Shield employee- Nick Fury (an astoundingly digitally de-aged Samuel L. Jackson).

Despite being a ’90s period piece that has the movies from the decade ingrained within its DNA, Captain Marvel surprisingly owes an enormous debt to Paul Verhoeven’s Robocop. Like Verhoeven’s human turned robotic protagonist- Alex Murphy, Vers’ journey to untangle the mystery of her past and identity reflects an internal struggle to find her humanity. While Robocop relegated this element to the periphery, Captain Marvel leads with this existential yearning. The result is an interesting origin story for the title character and the wholesome portrayal of superheroes that have graced the genre’s past.

Brie Larson commendably walks a fine line between the determined, difficult nature of Vers’ Kree character and the heroic qualities of her costumed persona. It’s a performance that’s unique for its moody edginess as much as it is for its earnestness and warmth. Ben Mendelsohn impresses in a role that finally allows his of kilter and casual persona to shine in a way that subverts our initial impression of Talos’ motivation and purpose.

Aside from a plethora of ’90s callbacks, (a particular favourite is Carol Danvers and co impatiently waiting for a video file to download via dial-up internet) Samuel L Jackson serves as the primary comedic foil. His performance cleverly uses Fury’s eventual no-nonsense attitude as a jumping off point for much of the younger incarnation’s charm and lightness.

Aesthetically, the film has a few moments in which the imagery startles the senses. Vers’ initial meeting with the Supreme Intelligence (in the guise of Annette Benning) draws the eye with its cosmic sights. There is one moment where many halos of bright white light are reflecting upon a grey surface as the exposition of the Skrulls is being conveyed with whizzing holograms of planets. The scene visually feels reminiscent of Superman’s first encounter with Jor-El in the Fortress of Solitude, in Superman the Movie (1978), particularly with its stark use of white and grey.

But Captain Marvel excels most in its memory scenes that paint the character’s origin story as a traumatic puzzle to be solved. In one scene, Talos probs her memories in an artful and impressionist manner to get at some truth of something from her past. In this and many ways, the film is made in the same spirit as many of those ’90s puzzle thriller movies that would slowly unravel and subvert the premise that it sets up. At its core, it’s a movie that seems less concerned with its central hero being conveyed in flashy terms, but rather in her humanity being front and centre. It has introspection, the time to show its characters realising hard truths and a wonderfully dogged spirit.

Notes from a distant observer: “Sartaj is a very eccentric fellow with a penchant for hats. He likes watching films and writes about them in great analytical detail. He has an MA degree in Philosophy and has been known to wear Mickey Mouse ears on his birthday.”
View all posts by Sartaj Govind Singh →
This entry was posted in 2019, 2019 Films, Comic Book Movies, Marvel and tagged 90s, Ben Mendelsohn, Bree Larson, Captain Marvel, Carol Danvers, Kree, Marvel Comics, Marvel Studios, Samuel L. Jackson, Skrulls. Bookmark the permalink.