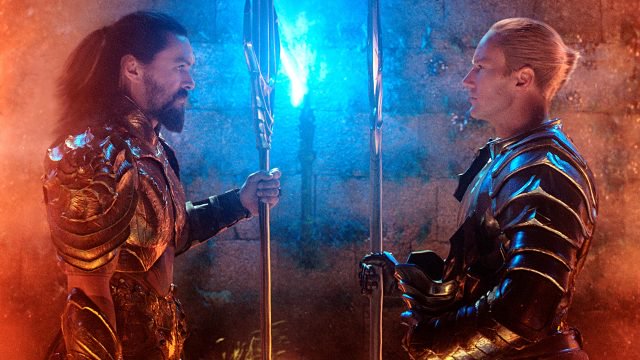 Aquaman is the best superhero movie that George Lucas never got to make. The film impresses as a grandiose four coloured epic that is unexpectedly moving and wholly surprising. Taking inspiration from Geoff Johns’s New 52 comic book series; the aquatic superhero tale is about Arthur Curry, (Jason Momoa) a reluctant heir to the sea sunken kingdom of Atlantis. He must embrace his heritage and family to prevent a political plot against his home; frequently referred to as the surface world.

If Johns’s comic run was a postmodern response to the persistent ribbing of Aquaman’s power set, then the 2018 film is a meta-exercise in justifying the heroism of its fishy title character. In Justice League, Momoa’s one-note dude, bro persona was a particular source of irritation. In Aquaman, the persona is frequently questioned and eye-rollingly acknowledged as an ill-fitting choice for Atlantis’s one true king. If anything, the film goes to great lengths to illustrate how much Arthur is out of his depth as his punch first attitude gets him into trouble, resulting in many Wile E Coyote esque punchlines in the action sequences.

Like Arthur Curry, the film is goofy, awkward, heavy-handed, but well-intentioned and heartfelt. Though its narrative is steeped in the conventional territory of a protagonist being a bridge for two races to unite, the lens it is viewed through is fun. It’s the comic book movie equivalent of Star Wars; if George Lucas swapped Saturday matinee serials for Saturday morning cartoons and new age spirituality for every inspirational 80s movie.

The director of the film is James Wan, an often overrated director whose horror movies contain impressively constructed sequences, but are never fully effective bone chillers in their own right. Fortunately, this proves to be an asset for Aquaman. I felt a great amount of joy in seeing Wan’s penchant for creative set pieces being unencumbered and frequently employed throughout the picture. A memorable section is Aquaman’s first appearance, which depicts the character dispatching a group of pirates who have taken control of a submarine.

The series of scenes are directed with the headbanging energy of a Metallica music video- as a shirtless Momoa is wielded like an action figure with heavy guitar riffs punctuating his amusing facial expressions and actions. With frequent uses of slow motion and a 360 panning shot from the point of view of a gun, the sequence presents a rare form of male objectivism that somehow manages to retain an innocent cartoony charm.

In moments like this, Aquaman proves to be subtly bold and spirited in its presentation of its central hero. In other regards, the film commendably portrays male anguish with genuineness and allows its characters to bemoan their choices with real weight.

Notes from a distant observer: “Sartaj is a very eccentric fellow with a penchant for hats. He likes watching films and writes about them in great analytical detail. He has an MA degree in Philosophy and has been known to wear Mickey Mouse ears on his birthday.”
View all posts by Sartaj Govind Singh →
This entry was posted in Comic Book Movies, DC, Reviews and tagged Amber Heard, Aquaman, Arthur Curry, Atlantis, DC Comics, james wan, Jason Momoa, Metallica, Nicole Kidman, patrick wilson, Star Wars, Temuera Morrison. Bookmark the permalink.