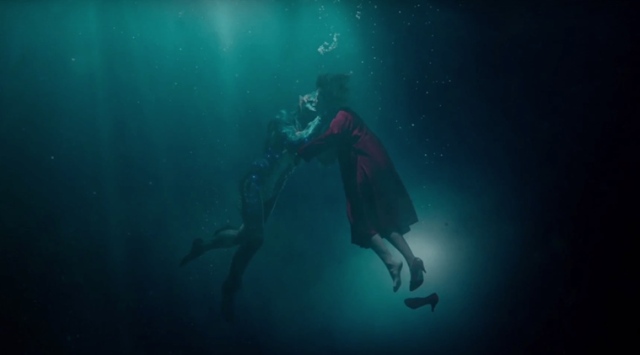 The Shape of Water is an enchanting fairy tale drenched in Americana. Set against the backdrop of the Cold War in the early sixties: The latest film from the Mexican fantasy auteur, (Guillermo del Toro) recounts the touching love story between a mute janitress named Elisa Esposito (Sally Hawkins) and a humanoid amphibian (Doug Jones). The latter character is being held in a top-security government facility, which is overseen by the nefarious Colonel Richard Strickland (Micheal Shannon).

Del Toro’s English language pictures always have trace elements of Americana coursing through their veins. Despite the Lovecraftian origins of the titular character from the Hellboy series: Ron Perlman injected the horned superhero with a gruff casualness that made him as quintessentially American as baseball.

The interpersonal conflicts and incidental flourishes of the world building in Pacific Rim made that picture seem like an American sports movie in Kaiju clothing. And the trials and tribulations of Edith Cushing (Mia Wasikowska) in Crimson Peak felt like Del Toro was providing a cinematic origin story for the budding literary American Gothic genre.

In the context of Shape of Water, Del Toro uses one of Hollywood’s preeminent genres to engulf the film in an effortlessly nostalgic hue. Throughout the film, Elisa connects with her neighbour Giles (Richard Jenkins) over classic black and white musicals that are playing on the television.

More crucially, Del Toro uses the genre as a means of bonding between Elisa and the creature as he responds to various records she plays for him. In the film’s most sublime moment, the idealistic qualities of the musical give rise to a monochromatic sequence in which Elisa sings about her feelings for the creature. Del Toro’s immaculate framing and extensive use of long shots combine with Alexander Desplat’s sweeping score to create a scene that feels genuinely romantic as opposed to a piece of mockable camp.

Sally Hawkins’s performance in the midst of this scene is commendable insofar as she takes a previously established internal frigidness and turns it into a raw and powerful new-found confidence, which burns with passion and flickers with a touch of melancholy.

Equally as compelling is Micheal Shannon, whose scintillating screen presence makes the Colonel a domineering force of nature. Despite appearing on the surface as a decorated war hero and upstanding father of the 1950s nuclear family, his character represents the arrogance and brashness of Americana. This is accentuated by Strickland’s presumption that men like him were made in God’s image.

The Shape of Water’s masterstroke comes from the interplay between this aspect of Americana and the title creature. Throughout the film, the humanoid amphibian affects some aspects of the people he comes into contact with. Giles’s lamenting of his youthful days, which comes in the form of his baldness is partially restored.

In the midst of undergoing torture at the hands of Strickland, the creature bites two of his fingers off. They are quickly sewn back together. However, rather than eventually healing, they instead turn to blackened ash. There is lip service given to the fact that the captured creature was a God in the land he was taken from (Amazonia).

Fundamentally, Del Toro has taken one of the most iconic movie monsters (Gill-man) in all of American cinema and turned him into a God figure whose behaviour can be attributed as embodying the values of the New Testament. This is directly juxtaposed with the prescribed fire and fury of the Old Testament that Shanon’s character represents. In one scene in the third act, he dramatically frames the Sampson and Delilah parable as a form of elemental vengeance.

In all his films, Del Toro’s monsters represent an interesting prism for us to consider humanity. The most enduring image of The Shape of Water comes from its final one in which Elisa and the creature are held in a long embrace deep within the ocean. The shot has a tremendous amount of religiosity as it evokes Michelangelo’s “The Creation of Adam.” Just like that painting depicts God breathing life into the first man: The final moment of the film illustrates a God figure, giving life to a mortal being via healing and turning Elisa’s neck scars (the source of the character’s mutism) into gills.

Ultimately, the moment represents our capacity to transcend and become better versions of ourselves; while also signifying that we are worthy of being loved by a higher being.

Notes from a distant observer: “Sartaj is a very eccentric fellow with a penchant for hats. He likes watching films and writes about them in great analytical detail. He has an MA degree in Philosophy and has been known to wear Mickey Mouse ears on his birthday.”
View all posts by Sartaj Govind Singh →
This entry was posted in 2018 Films, Reviews and tagged Crimson Peak, Doug Jones, Guillermo del Toro, Hellboy, Lovecraftian, Mia Wasikowska, Micheal Shannon, Pacific Rim, Richard Jenkins, Ron Perlman, Sally Hawkins, The Shape of Water. Bookmark the permalink.