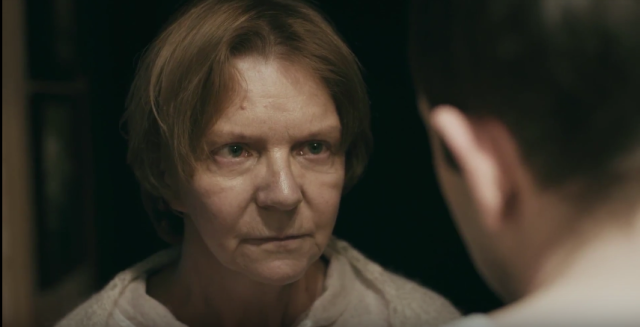 In the post-screening Q&A for Pagans, lead actor Valentin Samokhin and director of photography/producer, Maxim Trapo sketched out the origins of the film. The picture initially started life as a play (written by Ann Yablonskaya) that was performed twice a month in South Moscow. The adaptation from stage to screen seemed like a genuine labour of love due to the low budget feature coming from a deep-seated desire to capture the story in its purest form as opposed commercial gain. Samokihin put a finer point on it by highlighting that Theatre is a live medium, in which every incarnation has small and subtle changes as opposed to film, which is an inherently fixed medium.

Primarily set within the enclosed space of an apartment, Pagans charts the personal trials and tribulations of a family, which is accentuated with the arrival of a profoundly religious grandmother; who makes various attempts to heal the fundamental derision and division at the heart of the family.

Despite the extensive use of one location, director Lera Surkova makes the picture demonstrably cinematic. At times, the film lovingly adopts Ingmar Bergman’s penchant for making human faces cinematic. Much of the film is comprised of monologues delivered with sullen and amusing expressions. One highlight is a tight close-up of daughter Kristina (Vitaliya Yenshina), who coyly delivers a speech about the all-encompassing bleakness of winter and death that she experienced in the midst of an early childhood memory.

The film’s use of music is interesting insofar as there are small cutaways to the instrument that accompanies the scene in question. In reference to Kristina’s speech, there is a recurring image of African drums being played and this lends her outburst with the furious ferocity of rap that speaks to her underlying disenchantment and resentment. And the picture’s myriad number of black and white sequences reveal long considered memories that resonate with haunting surreality and touching anguished longing.

At the heart of the film is a raw breakdown of the contemporary family unit. But, what give Pagans a universality that transcends religion and the pitfalls of modern societal ills is an ambiguous determinism. From the start, it’s quite clear that the family is in dire disarray and will eventually fall and like any resonating tragedy, the catharsis comes from witnessing the dominos topple.

Many of the events that occur in the film are either interpreted as the random order of the universe or miraculous divine intervention. Much like the characters in the film, the audience can either construe the family’s downfall as a source of cited original of sin from the grandmother character or the family’s inability to engage and truly listen to one another.

A fascinating question that Samokhin was asked went as follows: Has the story changed for you having played the same character for six years? The actor said that in the early years, he interpreted the play as being about family and now it has changed to religion. The film and by extension the play represents the eternal dialectic between the divine and its role in the family.

Notes from a distant observer: “Sartaj is a very eccentric fellow with a penchant for hats. He likes watching films and writes about them in great analytical detail. He has an MA degree in Philosophy and has been known to wear Mickey Mouse ears on his birthday.”
View all posts by Sartaj Govind Singh →
This entry was posted in 2017 Films, Rare Posts, Rare Reviews and tagged 2017, Ann Yablonskaya, Ingmar Bergman, Lera Surkova, Maxim Trapo, Pagans, Russian Film Week, Theatre, Valentin Samokhin. Bookmark the permalink.